The symbiosis between architecture and nature is one that is becoming increasingly apparent in modern constructions. Vertical forests and gardens are the ultimate expression of this relationship, aiming to improve the air quality in cities, and the quality of life for residents. 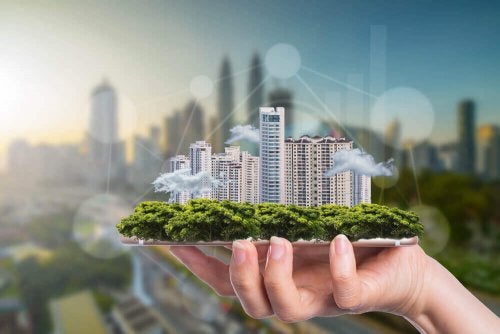 Garden skyscrapers are a modern architectural trend that aims to make the industry more sustainable. At a time when we are becoming increasingly aware of climate issues, the number of garden skyscrapers has grown significantly.

Experts estimate that every minute, humans cut down 28500 trees worldwide. In an attempt to combat this dangerous trend, architects are designing “green” buildings for some of the world’s largest cities.

Those who support the “green” building trend try to avoid using nature as a mere ornament to their designs. Instead, they set out to design buildings that can accommodate both people and trees.

Our cities are ever-expanding. In future, versatile and innovative skyscrapers will dominate their skylines. These vertical cities must be self-sustaining, and gardens will play an important part in making that possible.

So, in this article, we’ll show you a selection of skyscrapers which feature vertical gardens and forests.

This apartment complex first opened in October 2014, in the Porta Nuova Isola area of the Italian city of Milan. It is part of a much larger urban innovation project, which was lead by Hines Italia.

The project, known as the Vertical Forest of Milan, comprises two towers, one measuring 262 ft, and the other 367 ft high. Together, they provide a home to 480 large and medium-sized trees, 300 small trees, 11000 plants, and 5000 shrubs. This is roughly the equivalent of 2 hectares of woodland in an urban area measuring roughly 16000 sq ft.

Known as Il Bosco Verticale, this sustainable housing complex complements the metropolitan reforestation project. It also contributes to the regeneration of the environment, helping to boost urban biodiversity without expanding the city horizontally.

The interesting thing about this project is that it serves as a model for the vertical densification of nature within cities. Moreover, the whole proposal forms part of the reforestation and naturalization policies put in place by large cities and metropolitan areas.

The project aims to protect biodiversity and create a new urban ecosystem. Furthermore, the great array of plant life contained within these vertical forests provides a home for a number of bird and insect species.

This 380 ft tall building is used for residential apartments of all different sizes. It also contains a number of offices and recreational areas, with a panoramic restaurant on the top floor.

It was designed by Italian architect, Stefano Boeri, who is also the architect behind Il Bosco Verticale in Milan. The unusual thing about this building is that it will be the first skyscraper in the world to be covered in evergreen trees.

Composed of simple lines, the facade is made up of a series of protruding balconies and reinforced with concrete panels, making it look like a tower of boxes. These boxes help create a sense of movement and take full advantage of the natural light.

But the design of La Tour des Cedres isn’t just remarkable on an architectural level – it’s also important on an urban level. In terms of size and architecture, this simple building plays a huge role in the city’s changing landscape.

This high-rise will help boost plant biodiversity, right in the heart of a large European city. Thanks to its shape and the use of cedar trees, the appearance of the building will change with the seasons. There’s no doubt that it will become a prominent landmark in the panorama of Lake Geneva.

The idea is that Lausanne will become a city of avant-garde architecture. It is a city that is well aware of the social challenges of implementing high-quality buildings in a sustainable way.

Trees are individuals. Each has its own evolution, its own biography, its own shape.

The Stefano Boeri Architetti design firm now has plans for a 177 ft tower. This building will be located in the metropolitan Parisian suburb, Villiers-sur-Marne, and will be covered with more than 2000 plants and trees. This is the equivalent of over a hectare of woodland.

The top floors of the Forêt Blanche (White Forest) will contain apartments, while the lower floors will house offices and commercial businesses. Plants will fill the balconies on all four sides of the building.

The east and west sides of the high-rise will feature a number of windows to “allow the passage of sunlight all day, giving natural illumination and ventilation to the apartments and an exceptional panorama of the landscape of central Paris.”

This vertical forest, which will be opening in Utrecht in 2020, was the winner of an international competition for the development of the Jaarbeursboulevard area. Like the others, it was also designed by architect Stefano Boeri Architetti.

Christened the Hawthorn Tower, this vertical forest is one of two towers set to be built in the center of Utrecht. At almost 300 ft tall, the tower will house more than 10000 plants of a variety of different species.

This project aims to create “an innovative experience of cohabitation between city and nature”. Thanks to its green facade, the Hawthorn Tower will absorb 5.4 tons of CO2. This will help to improve the air quality and, in turn, improve the quality of life for the city’s residents.

So, as you can see, garden skyscrapers are a popular trend. With any luck, these vertical forests will continue to pop up in cities around the world, and nature will one day become the backbone of architecture.

Homes
A Window Cleaning Robot - a Breakthrough for Today's World

In terms of home hygiene, technology makes our work easier through machinery that offers extraordinary results. One example, in particular,…

Homes
How to Use Tropical Art Prints in Your Home

Today we'll look at five ways to decorate with tropical art. From the minimal to maximalism. A few seasons ago…

Homes
How to Properly Set a Table

Learning how to set a table isn't hard. It requires some prior knowledge and, of course, good taste. You must give it the importance it deserves because sharing a meal…

Homes
Use Chromatherapy in Your Home to Create Harmony

Colors influence your mood and can make your home decor feel more upbeat, cheerful, and relaxed. Therefore, we're going to…

Homes
Decorating Trends that You Thought Would Never Return

These are only some of the decorating trends that you thought would never return. Nevertheless, they have, but they have…

Homes
A Window Cleaning Robot - a Breakthrough for Today's World

In terms of home hygiene, technology makes our work easier through machinery that offers extraordinary results. One example, in particular,…

Homes
How to Use Tropical Art Prints in Your Home

Today we'll look at five ways to decorate with tropical art. From the minimal to maximalism. A few seasons ago…

Homes
How to Properly Set a Table

Learning how to set a table isn't hard. It requires some prior knowledge and, of course, good taste. You must give it the importance it deserves because sharing a meal…