Oscar Niemeyer, one of the most prolific architects of the 20th century, left behind many samples of his creative talent. The Rio Chaise Longue reveals Niemeyer's love of curves. 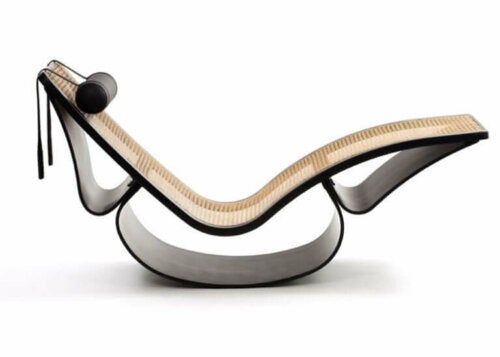 The Rio Chaise Longue chair is an example of Oscar Niemeyer’s fascination with curves. This Brazilian architect is one of the most prolific of his generation. His buildings exceptionally and delicately bring sculpture and architecture together and create something unique.

Niemeyer, a great admirer of curved and abstract shapes, materializes these preferences in the Rio Chaise Longue. Having been born in the city of Rio de Janeiro, he was inspired by its exuberant nature. He adopted the name of the chair from Rio, and developed it in collaboration with his daughter Anna Maria Niemeyer.

Designed in 1978, this chair has already become a timeless furniture classic due to its curves. It appreciates the beauty of the feminine form that Oscar Niemeyer so admired, together with his passion for Rio de Janeiro.

Oscar Niemeyer – the architect of the curve

Niemeyer was born in Rio de Janeiro on December 15, 1907. The concrete buildings designed by this Brazilian architect stand out for their support-free curves, and for their dynamism and lightness.

The designs of the Congress building, the Planalto, Alvorada, and Itamaraty palaces, as well as the imposing cathedral, are prominent.

Other examples are his first projects – a Franciscan temple and a casino on the shores of Lake Pampulha. He achieved fame with these projects and the casino is currently a contemporary art museum.

Niemeyer worked on large projects around the world. One of these was with Le Corbusier on the United Nations building in New York. He also accepted commissions for the design of the Communist Party of France Headquarters, the Mondadori Editorial Headquarters in Italy, and the University of Constantine in Algeria.

The architect carried out these works during his exile in Europe which was due to the 1966 Brazilian military coup. The long-awaited homecoming occurred in the 80s, the period when he inaugurated the Rio de Janeiro Sambadrome. Back at home, he displayed his creativity and passion for architecture.

People consider Niemeyer one of the best representatives of modern architecture because of his talent. Because of the quantity and quality of the buildings he designed, he’s the epitome of 20th-century architecture.

In 1988 Oscar Niemeyer received the Pritzker Prize, the most prestigious award in architecture, after a very fruitful career. This recognition came late for him b he received it at the age of 81.

Niemeyer constantly sought innovation through invention. In his view this differentiates, good architecture from bad architecture. He said, “if architecture wants to be ranked as work of art, it must be bold,” he concluded.

His life was a constant exploration of reinforced concrete. Through this material he was able to capture his exceptional undulating projects and reject the straight line that he confessed to hating.

In 2005, he donated the design of one of his largest architectural projects in Europe to Spain. This is the Oscar Niemeyer International Cultural Center that is located in the Asturian city of Avilés. This project, close to the Avilés estuary, condenses the artist’s most significant work.

During exile Oscar Niemeyer began to design furniture. In his studio in Paris in 1971, he did this with his daughter Anna Maria Niemeyer who had already overseen many of the interiors of his main buildings in Brasilia.

This chair has a wicker seat and a wooden frame, and is the hallmark of Niemeyer’s buildings. It’s an evocation and a longing for his homeland. Brazil always had a special place in his heart because it had such a strong influence on his work.

He stood firm on what the chair represents “the curves that I find in the mountains of my country, in the winding of its rivers, in the waves of the ocean and the body of a beloved woman.”

The Rio Chaise Longue is made of curved laminated wood and black veneer and is an eye-catching piece. A handmade wicker weaving, typical of Brazil, stretches over the wooden structure. To complete its expression, it has a cylindrical black leather cushion that serves as a headrest that’s adjustable.

Niemeyer started late in life and his furniture designs were an extension of his architecture. He said it was “difficult to find a solution of comfort and aesthetics” in his designs.

Oscar Niemeyer and his Rio Chaise Longue chair were a symbol of his fascination for the curve. Although he’s best remembered for his buildings, the furniture he designed along with his daughter are icons of modern Brazilian design.

Homes
Floor Lamps That'll Illuminate Every Corner of Your Home

Floor lamps are a practical and aesthetically pleasing item to take into account for your home. Good lighting is key…

Homes
Check Out These 4 Texture Types for Your Bathroom

When updating the bathroom, you can use tiles with texture to bring brightness and make the environment more dynamic. We're…

Would you like to opt for the elegance and versatility of a white living room? You'll discover some ideas here. As time goes by, styles come and go, but one…

Homes
6 Ideas to Make the Best of Plain White Walls

It's common to stand in front of a white wall and not know what to do with it. There are…

Homes
How to Make a Miniature Garden

Maybe you live in a city apartment or your house doesn't have enough space to have a large garden. Don't…

Outside
Beautiful Minimalist Fountains for Your Garden

Minimalist fountains are the best way to complete your garden and the exteriors of the house. Consider them as an…

If you love nature but lack space in your home, you can decorate with hanging plants. In addition to being…

Household appliances are constantly being innovated and improved. International companies try to show all the improvements and new features to…