The Oscar Niemeyer Museum - The Eye of Curitiba

The Oscar Niemeyer Museum, opened in November 2002, is located in the Brazilian city of Curitiba. With its distinctive eye-shaped design and sinuous pedestrian ramps, it bears all the hallmarks of the Brazilian architectural master. 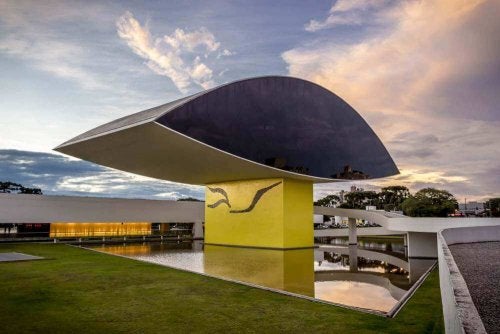 Oscar Niemeyer has left the world an incredible architectural legacy. There’s no better proof of this than the Oscar Niemeyer Museum in the Brazilian city of Curitiba. The museum is one of the largest in the world, up to 50% larger than the Guggenheim in Bilbao, or the Tate Modern in London.

The Oscar Niemeyer museum has a total area of 560,000 sq ft, of which 380,000 sq ft is built-area, leaving over 180,000 sq ft for the exhibits. The museum is an extension of a pre-existing building called the Castelo Branco. Also designed by Niemeyer, it was built in 1967 in the center of Curitiba.

The new annex building takes the form of a great eye and features many of the Brazilian architect‘s signature elements. What’s more, the Oscar Niemeyer Museum stands out for its incredible subtlety and captivating beauty.

Also known as Niemeyer’s Eye, the museum is one of the largest cultural complexes in the whole of Brazil, with both exhibition and activity areas. This famous example of Niemeyer’s architecture places a huge emphasis on culture.

It features various departments relating to the art world, as well as an auditorium, plazas, cafes and outdoor areas. The museum is closely associated with the visual arts, architecture, and design, and owns a large collection of exhibits.

This extraordinary architect was born in Rio de Janeiro, Brazil, in 1907. He finished his studies at the National School of Belas Artas in Rio de Janeiro in 1934. His distinctive style is largely a product of his work with Le Corbusier. The two worked together on several occasions, most notably the construction of a new Ministry for Education and Health in Rio de Janeiro.

Another important figure in Niemeyer’s life is the architect Lúcio Costa. They collaborated on a project that appeared in the Brazilian pavilion at the New York World Fair. Oscar Niemeyer later became famous for his curving designs, which add a touch of sensual beauty to his constructions.

In 1956, Oscar Niemeyer, along with Lúcio Costa, was asked to develop the new capital city of Brazil, which would be named Brasilia. This large project took 4 years to finish. It became Niemeyer’s laboratory, allowing him to experiment with all the curves and arches that would one day characterize his work.

However, one of Niemeyer’s biggest projects is located in Europe: The Oscar Niemeyer International Cultural Center. This avant-garde construction is an example of some of his best work.

Over the years, he won many awards for his work, including the AIA Gold Medal from the American Institute of Architects in 1970. In 1988, he received the Pritzker Prize, which is considered the Nobel Prize for architecture. In 1989, he also won the Prince of Asturias award.

“Architecture is a matter of dreams and fantasies, of generous curves, and wide and open spaces.”

The Oscar Niemeyer Museum, often simply known as The Eye, was inspired by the silhouette of the araucaria, a native tree of the Brazilian state of Paraná. The stylized shape is supported on a rectangular base, decorated with yellow tiles, which were painted by Niemeyer himself.

The materials used are those found in the majority of Niemeyer’s works: concrete and glass. The Eye rises above a pool of water, which reflects the building and its surroundings. It’s almost 100 ft in height and houses the museum’s main exhibition hall.

The new extension was designed to restore the original function of the building: a place dedicated to education. With this design, Niemeyer had the opportunity to reinvent his work. Today, the museum juxtaposes the architectural styles of two eras: modern and contemporary.

The main building is a long, low structure that stands on a set of low pillars. Curving ramps connect it to the audacious new annex building. It’s over 650 ft in length and seems to blend seamlessly into the complex as a whole.

These ramps are one of the most notable features of the building and create a connection between the two architectural eras. A modern, futuristic underground tunnel also connects The Eye to the main part of the museum.

The Oscar Niemeyer Museum – the culmination of his work

In short, this building is the culmination of Niemeyer’s life’s work. With its bold style and sinuous lines, the Oscar Niemeyer Museum is a fantastic representation of this master of architecture.

Inside the museum, you can find a space exclusively dedicated to his work, where you can read his reflections on his career. Without a doubt, Niemeyer was passionate about shapes, curves, and beautiful, sensual surfaces.

The difference between blinds and drapes is that the former close upwards. Usually, they're flat and give a sense of…

Homes
The Colorful Charm of the Memphis Design

Even though it started in the '80s, the Memphis Design and its patterns and colorful mixes is here to stay.…

Homes
Floor Lamps That'll Illuminate Every Corner of Your Home

Floor lamps are a practical and aesthetically pleasing item to take into account for your home. Good lighting is key…

Homes
Check Out These 4 Texture Types for Your Bathroom

When updating the bathroom, you can use tiles with texture to bring brightness and make the environment more dynamic. We're…

Would you like to opt for the elegance and versatility of a white living room? You'll discover some ideas here. As time goes by, styles come and go, but one…

The central meeting place of every house is the living room, especially the sofa. Therefore, it's necessary to look after…

Homes
Choosing the Best Blinds and Drapes for your Home

The difference between blinds and drapes is that the former close upwards. Usually, they're flat and give a sense of…

Homes
The Colorful Charm of the Memphis Design

Even though it started in the '80s, the Memphis Design and its patterns and colorful mixes is here to stay.…