Learn about a prime example of Modernist architecture. 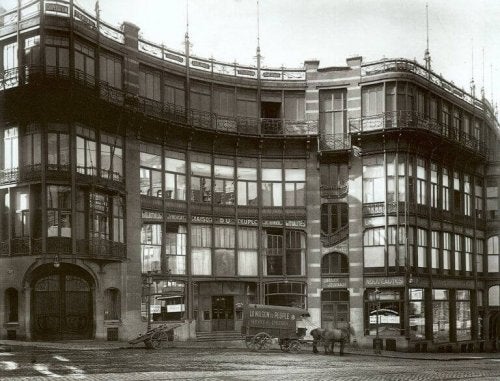 The Casa del Pueblo is an example of innovation and architectural revolution.

Modernismo has left us real gems of architecture. The structures of this trend have become a true reference for today. That’s why we’re going to look at the architecture and design of Casa del Pueblo by Victor Horta.

This work takes leave from the formalities of classic art. Above all, it’s a departure from the powerful influence of the Neoclassicism of 19th century Europe. What’s more, the architect tried to open a new field of vision and a new direction different from conventionalism.

The break with architectural heritage is evident in this work. As an example, the world of design and decoration that Horta offers is truly surprising. So we must study this house along with its most significant qualities.

A bit of history about la Casa del Pueblo

Casa del Pueblo is in Brussels, Belgium, in the la plaza Emile Vandervelde. Built between 1896 and 1898, it was constructed in the boom of modernist art. That’s where this work fits into the style and reflects the aesthetic buildings most characteristic of this period.

This construction is also in the category of art nouveau. The Belgium Worker’s Party commissioned this building. That’s why Victor Horta received the help of the famous socialist architect, Richard Pringiers.

The area where Casa del Pueblo sits in very large. This is to accommodate the various functions of the building, including offices, businesses, event rooms, etc.

It opened a new direction in the world of construction. This is a building that can serve many uses. And it completely takes advantage of space.

The artistic concept of the house

When considering the concept of the structure, we should begin at the aesthetic base of the Modernist style. Principally, this construction has been established as a large block in which each section is perfectly related to another. Let’s look at some of the specific characteristics:

The conceptal expresion of the facade of Casa del Pueblo

The exterior of the building is a descriptive and identifying component of the interior. The first thing we see is the exterior. From there, the interior adapts to the alternative aesthetic of the facade.

Different materials are visible in the interior. For example, there is a massive framework in brick, metal, and horizontal strips of white stone. Also, other natural components enliven and create subtly. At the same time, they are strikingly conserving the modernist aesthetic.

However, what draws the attention the most is the sensation of openness of the interior to the exterior and vice versa. The picture windows that cover the entire front of the building, give the structure a connection to the street.

New sensations in the interior

When you enter the building, you perceive the feeling of an architectural revolution. This means that it’s a formal and innovative unit that denotes a new path for the architecture of the time.

Above all, it’s in the infrastructure where you can best understand the constructive novelty. There are original designs and materials, with no comparison. Casa del Pueblo may have inspired other structures of the era. This being said, Horta tried to produce the avant-garde and the alternate direction.

Lina Bo Bardi – A Pioneer of Modern Architecture
Brazilian architecture wouldn't be what it is today without Lina Bo Bardi, who created some of the most incredible buildings the world has ever seen. Read more »

You may have heard of the term “home staging”. It’s a practice that’s been helping people sell their houses in…

Technology has created many different advantages for homes. More and more programmable devices have highly advanced electronic systems. In this…

You may have heard of the term “home staging”. It’s a practice that’s been helping people sell their houses in…

Technology has created many different advantages for homes. More and more programmable devices have highly advanced electronic systems. In this…