Learn About the Colors in Spike Jonze Movies

Noticing the colors in a Spike Jonze movies is intriguing. 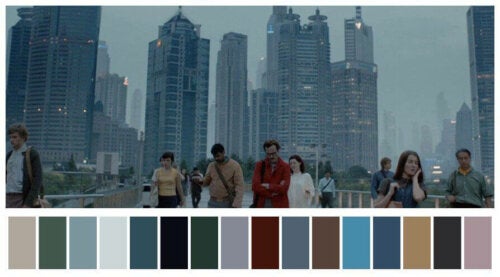 With movies like Where the Wildthings Are and Being John Malkovich, Spike Jonze has left a quality brand to his films. What’s more, he’s paid special attention to the palette of colors in the scenes where he films his movies.

Spike Jonze has discovered how to effectively use colors in the films that he directs. Perhaps, the movie that best demonstrates the master way he uses color is Her.

Spike Jonze wrote and produced Her, in which there is a specific use of color as an aesthetic resource. The context of the movie becomes important when color is introduced. Therefore making it a singular element of the movie. Also, it has great sensibility with some somber touches due to the stupendous interpretation by Joaquin Phoenix.

The selection of colors in a filmmaking project is often a real headache for the creator. Defining the palette of colors they’ll use in a movie takes a lot of effort and a constant inspirational search.

Theodore is a futuristic retro aesthetic who characterizes this film. But it’s far from the dystopias that are the general norm for fictional films. Here the colors are warm, such as maroon and ochre.

The chromatic harmony that appears in the movie eliminates disparities. It avoids strong contrasts, removing the tension in favor of a search for tranquility and naturalness of the layout.

The past is only a story that they tell us.

Her, the vision of a technological and solitary world

The chromatic palette in Her/garotasgeeks.com

In Her, love is a theme present during the entire movie. But it’s the story of unconventional love in a world plagued by technology.

The story occurs in the future, where Theodore (Joaquin Phoenix), a lonely writer, is in the middle of a dramatic divorce. In general, his life is monotonous and boring and he doesn’t meet with friends very often. Most of his time is spent writing and playing video games.

However, the routine changes when he acquires a new operative system for his cell phone and computer. And her name is Samantha which is the voice of Scarlett Johansson. This is an artificial intelligence that attracts Theodore, not just because of her voice, but because he gets his work done.

This is something or someone, even though it’s not safe. Theodore obeys her orders and also, she listens and gives advice. Consequently, he falls in love with this artificial intelligence giving him constant joy.

Because it’s based on a script that Spike Jonze wrote exclusively, this is a unique movie. The genre is science fiction, foretelling a not distant or even crazy future when humans interact with artificial intelligence.

The movie unfolds ingeniously, recreating an actual world that’s believable. At the same time, the colors are an important key factor.  The psychology of color makes us feel closer to Theodore’s story. Spike Jonze does this through the use of warm and cool tones.

Not only does this movie have an excellent script, but the choice of architecture and the design of the spaces also work. The use of browns, ochres, and reds provide an antique aesthetic, with much nostalgia.

The combination of these areas of warm colors and the nostalgia are the hallmarks that permeate the cinematic set. The mention of a difficult past to overcome on the part of the main character is what the elements reinforce.

Warm colors make us feel close to the main character. But also, there are cool colors that emphasize the loneliness of the character and his problems getting over a close relationship.

This movie uses colors, that subconsciously turn into a pattern. For example, there are scenes with cool colored backdrops with gray tones combined with bright orange.

One of the colors that dominate the entire film is red. For instance, the main character, Theodore, wears red.

Red appears in many places. You see it in the lights, in objects in the background or the operative system of Samantha. This color, in one of its shades, is the mainstay that dominates the entire production. The movie has a very specific palette of colors that is pleasing to the eye.

The cinematography of Spike Jonze stands out, not only for its script but also for the special attention to the colors and the design of the areas in the scenes. What’s more, this director from the United States, with his long career, uses colors to enhance his creations.

Combining Colors in Your Interior Decoration
Combining different colors isn't always as easy as it seems, so here are some key tips on how to find the perfect color combinations for your home. Read more »
Link copied!
Interesting Articles
Homes
Decorate Your Home with a More Glamorous Style

Is it possible to decorate your interiors in both a relaxed and alternative way? We think so! Decorate your home…

Homes
The Austere Architecture of of Eladio Dieste

The Uruguayan engineer Eladio Dieste stands out for his architecture. He left behind extensive, varied work in Uruguay. The buildings…

Invisible doors are doors that are flush with the wall. These are characterized by their formal look. This style of…

Homes
Five Tips to Apply the Glam Style in Your Home

New decor trends are making their way into the interior design world. To reach a degree of originality and innovation,…

Homes
Types of Light Bulbs and Where to Put Them

You must study your house to plan its lighting. Only this can achieve spatial transparency and avoid gloomy rooms. So…

Homes
Doing Yoga at Home - Setting up a Place

There's often not enough time, and it can be hard to find ways to channel stress and deal with the…

Is it possible to decorate your interiors in both a relaxed and alternative way? We think so! Decorate your home…

In the interior design world, there are so many options for wall decorations. You can use different colors, pictures, or…

Homes
The Austere Architecture of of Eladio Dieste

The Uruguayan engineer Eladio Dieste stands out for his architecture. He left behind extensive, varied work in Uruguay. The buildings…

Invisible doors are doors that are flush with the wall. These are characterized by their formal look. This style of…