The History behind Bathrooms

Have you ever wondered when humans first started using bathrooms? Let's go back to the past to trace its beginnings. Don't miss out on this interesting post! 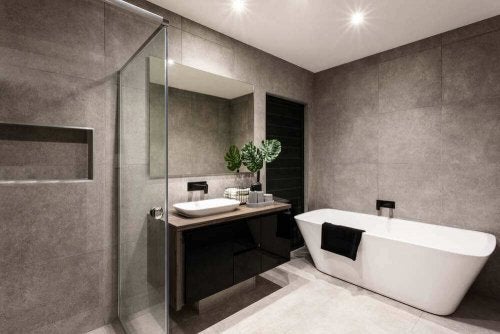 Bathrooms have evolved throughout history with civilizations, over time their locations and functions have changed to better adapt to new lifestyles and hygiene habits.

But in the beginning, they didn’t necessarily start as a restroom. Bathing rituals are more complicated. In some civilizations, they even had religious purposes.

Bathrooms, a trip to the past

Get ready to go back in time to learn a little history. Our first stop is Ancient Greece and from there, we’ll walk through to the 21st century.

The first known spaces in Western civilization with hygienic purposes are now ruins that once were the queen of Knossos’ bathroom. Her husband, King Minos, ordered the construction of her bathroom in the Knossos Palace in Crete.

In time, all the Hellenic cities copied the bathroom. But it was the Romans who gave bathrooms and bathhouses a social and architectonic dimension.

Toilets also existed at the time of the Romans. Only a select few, however, had the privilege of having access to running water.

In Islamic culture, bathrooms serve both social and religious purposes. Bathrooms were places to socialize and bathe. Meanwhile, in a religious context, they were a place to purify the body and soul.

In Medieval times the concept of bathrooms changed radically. After big political, philosophical and religious reforms, people began to consider hygiene as a sinful practice.

Bathrooms in the 16th and 17th centuries

In the 16th and 17th centuries, the naked body was a taboo, which led to many problems in hygienic practices. Many public bathrooms disappeared and the smell grew considerably.

It was during this time a lack of personal hygiene hit rock bottom in Europe. Consequently, there was a rise in infectious diseases.

Near the end of the 16th century, Sir John Harrington thought up the idea of a seat with an underground drainage system and water tank. In his design, opening the tank would allow water to fall into the seat, carrying away its contents. And it was the precursor to the modern toilet we know today.

But Alexander Cummings and Joseph Bramah designed the toilet that would bring the world to modernity. The 18th century promoted the relationship between hygiene and health.

Bathrooms and restrooms made their way into homes at the end of the 19th century.

Thanks to the advances in city planning, city architects created a system similar to our modern-day sewers. In turn, bathrooms progressed into modernity as well.

The new systems included complex installations such as plumbing, faucets, drains, and boilers. These advances brought a new sense of comfort and pleasure to bathrooms.

Bathrooms finally became what we know them to be today in the 20th century. The architectural changes from the first to the second half of the century are a good indication of the progression: in the second half, bathroom designs were triple the size of what they originally were at the beginning of the century.

They continued gaining a permanent space as well as priority in homes. Before the 20th century, urban residential buildings usually had a single bathroom for all the apartments on the first floor.

Today, bathrooms are an essential part of a home. Also, bathroom design and decor holds greater weight than ever as people value comfort and well-being.

We spend more time in our bathrooms bathing, applying facial and body treatments, all of which are important activities to stay healthy physically and mentally.

In today’s world showering daily is a common practice but other tools promote personal hygiene and grooming. Not to mention, relaxation methods are abundant as well.

In any case, the perfect bathroom must suit the personal needs of its user. It must include a good layout of installations, accessories, and materials that make the most of the space while helping the user feel comfortable.

Wasn’t that interesting? We hope you enjoyed today’s post.

Redecorating a Bachelor’s Home for Two
Taking the next big step in your relationship? We want to help you transform your place into a home for two! Check out our tips today. Read more »
Link copied!
Interesting Articles
Bathroom
Bathroom Soap Dispensers - a Clean and Healthy Solution

Original resources that attract attention and that convert a room into an attractive place are an interesting choice. Therefore, let's…

Bathroom
How to Choose the Best Shower For Your Bathroom

The function of showers isn't just limited to hygiene. Showering can be a time of day to relax. However, it's…

Everyone wants a home that feels original. Depending on the space, certain elements can make a big difference. In this…

Bathroom
How to Clean Your House in Record Time

We live in a very busy world, in which we have to take advantage of every minute of every day.…

Bathroom
Effective Solutions for Clogged Pipes - What To Do

There's nothing worse than trying to get the gunk out of a sink, shower, or toilet. We'll show you some…

Bathroom
Different Types of Toilet Roll Holders For Your Bathroom

Bathrooms have very specific requirements when it comes to the furniture, fittings and decorations, so it's important to pay attention…

Art deco trends come and go and are sometimes difficult to incorporate into your home. However, some great classics never seem to go out of style. These are some timeless…

Twice a year, you'll probably have to do a task that you dread - organizing your wardrobe. Do you know…

Homes
Teach Your Kids How to Keep a Clean House

If you want to have a clean and orderly house, then your children should learn good habits and take part…