César Pelli and his Importance in Modern Architecture

César Pelli's architecture is a display of one of the most brilliant minds in world architecture. With high rise buildings, this architect shows that aesthetics and functionality can work together harmoniously. 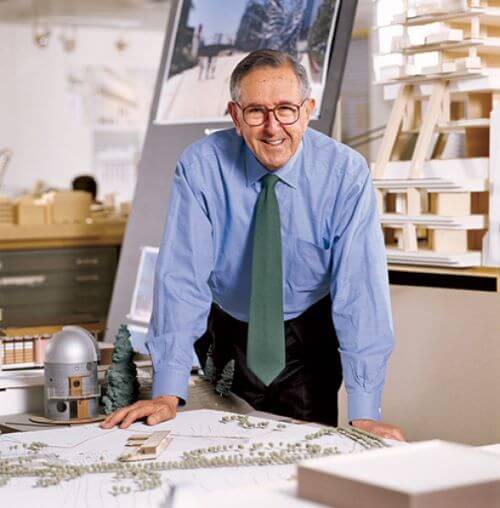 Argentine architect César Pelli is remembered for his iconic buildings in different cities around the world. However, he wasn’t as extroverted as some of his peers but César Pelli’s legacy is undeniable.

His work has left a mark on architecture worldwide and contributes to the aesthetics of modern construction.

A brief biography of César Pelli

César Pelli was born from a marriage between a teacher and an Italian officer. He met his future wife the Spanish architect and landscaper Diana Balmori when he was a child.  They both studied architecture and were graduates from the University of Illinois.
The couple worked in Eero Saarinen’s studio for 10 years, then when he was 51, César Pelli and Diana Balmori created their own studio. This was after they were commissioned with the extension of the Museum of Modern Art, in New York.
However, this extension received a lot of criticism because people thought it wasn’t ambitious but this didn’t harm Pelli’s career. His studio grew, thanks to his high quality and functional architectural projects that helped him make his name.
For over 8 years, between 1977 and 1984, he worked as the dean of Yale University. Afterward, in 1984, his studio finished Goldman Sachs’ offices – the tallest building in New Jersey.
In 1988, he finished Brookfield Place, in the World Financial Center. Diana Balmori worked as a landscaper and died in 2016. Balmori worked with her son Rafael, and architect too, on landscape projects.
The most memorable of Pelli’s work are the Petronas Towers in Kuala Lumpur, the tallest building in the world until 2003. This project was a very important one for Pelli, placing him at the very top of the architectural world. It’s worth noting that, this helped him get commissions for many projects, from skyscrapers to entire neighborhoods.

In 1991, Kuala Lumpur’s officials wanted to create a business district in the city that covered over 20 acres. It included office buildings, residential and shopping areas, and other buildings, like a mosque.
The idea was to showcase the city’s modernity and demonstrate a symbol of a thriving country and Malaysia’s booming economy. There was no doubt that the most important building in the district would be this pair of unique twin towers.
These 1,230 feet tall towers are the result of an international competition in which 8 architectural studies took part. Pelli & Associates created the winning project and the official inauguration for the towers was on August 31st, 1999.
The towers are inspired in traditional Islamic art, honoring the country’s Muslim past and matching it with high-end tech. The concept Pelli used to develop the towers comes from Islamic geometrical designs.
On the ground floor, two squares link and unlink at the top. The building is inspired by the twelve pointed star of Islamic tradition and it includes a circle on each intersection.
The towers are joined together by a sky bridge that’s between the 41st and 42nd floors that’s an escape route for emergencies.

This project is in Hong Kong and is a tall and slender tower, with 88 floors, that stands out from other buildings. Its walls, with a retro-style look, are reminiscent of Hugh Ferris’s’ futuristic designs.
A curtain wall goes along the entire building that reinforces the design’s verticality. The Internal Finance Center is a complex network of connections, public and commercial spaces that’s a mini-town inside a big city.
The building’s obelisk shape stands out from the city’s skyline and it narrows as it gets higher, creating vertical movement.
This tower depicts the International Finance Center’s spirit – safety and harmony.

“Architecture can be defined as giving the right answer and an artistic interpretation to the problems that come up in a project in particular.”

This tower is a joint effort between the Pelli Clarke Pelli office and the Spanish studio, Ortiz León Arquitectos. It has 50 floors and is over 800 feet high and this building is part of the four-tower business area in Madrid.
This building stands out for its diamond shape and simple lines. With its lobby that’s 32 feet high and glass walls, it’s a symbol of the city’s skyline.
The building’s like a giant puzzle piece, which makes it well-known in Madrid and it has a vertical garden on the top floor that is almost 100 feet high.
César Pelli’s works are part of architecture’s history and these are his main projects. Sadly, , César Pelli died in July 2019 at 92, leaving a legacy behind.
Paimio Sanatorium – A Triumph of Modern Architecture
Located in Finland, the Paimio Sanatorium is one of the most iconic works of Finnish architect Alvar Aalto. Find out more in this article. Read more »
Link copied!
Interesting Articles
Homes
Chromatic Contrast Is Essential

By choosing a shoe rack that fits your personal taste, you'll find it's an excellent way to declutter and keep…

Is it possible to apply color dissonance as a decor trend? In the world of interior design, people usually seek…